Their concerts combine exceptional writing and storytelling with the deep pleasure of live music. 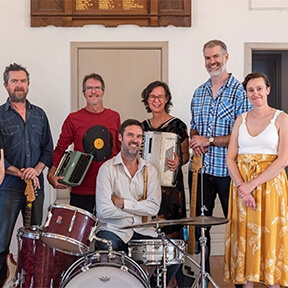 "The personal stories entwined with the songs transcends any other writers festival event I’ve been involved with. I bloody loved every moment and left just wanting more." Markus Zusak, author of The Book Thief and Bridge of Clay.

The show has been a hit at festivals since its debut in 2014 at the Williamstown Literary Festival, where its audience grew from 60 in 2014 to 400 in 2019.  The show has been performed in Albury four times (Write Around the Murray Festival), Bendigo Writers Festival (2021), Geelong Word For Word Festival, Geelong Library Opening Celebrations, Glen Eira Story Telling Festival, Newport Folk Festival (three times), Newstead Short Story Tattoo, Brimbank Readers and Writers Festival, and Wangaratta.

“The concerts combine exceptional writing and storytelling with the deep pleasure of live music. Vin Maskell’s artful arrangement, curation and presentation of each story and every show is intrinsic to the experience. The concept and its skilful execution clearly strike a deep chord with a diverse range of people, prompting memoirs to be shared around the hook of a song.”  Ann-maree Ellis, director, Write Around the Murray Festival.