Nardi is a Yuwaalaraay writer, musician, composer and educator from North West NSW. 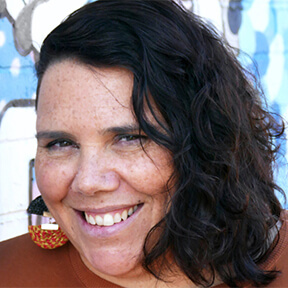 Nardi Simpson is a Yuwaalaraay writer, musician, composer and educator from North West NSW freshwater plains. A founding member of Indigenous folk duo Stiff Gins, Nardi has been performing nationally and internationally for 20 years. Her debut novel, Song of the Crocodile, was the 2018 winner of the black&write! Fellowship.

Since then, it has been shortlisted for the Victorian Premier’s Literary Awards for Indigenous Writing; in the Indie Book Awards for Debut Novel; in the NSW Premiers' Literary Awards for the UTS Glenda Adams Award for New Writing; as well as longlisted for the Miles Franklin Literary Award, Stella Prize; and ABIA Literary Fiction Book of the Year. Nardi is currently undertaking a PhD in composition at the Australian National University, researching the traditions of song and story in her beloved Yuwaalaraay homelands.