Jane was born in Australia but has her writing has taken her all over the world. She now lives in NSW, calling Albury her home. 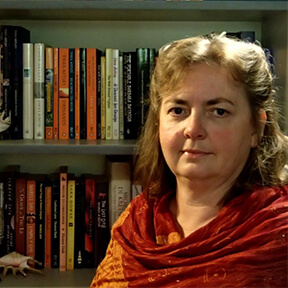 Jane Downing was born in Australia but was taken to live on Manus Island a month later. She has since lived in Tanzania, Ireland, Indonesia, the (then) USSR, China, the Marshall Islands and Guam, as well as Canberra and now Albury. While living and working in the Marshall Islands, where truth was often stranger than fiction, she began to write.

Downing’s short stories and poems have been published widely around Australia and overseas, including in Griffith Review, The Big Issue, Antipodes, Southerly, Island, Overland, Westerly, Meanjin, Canberra Times, Cordite, and Best Australian Poems (2004 & 2015). Her first two novels – The Trickster (2003) and The Lost Tribe (2005) – were published by Pandanus Books at the Australian National University and her next novel Yack was Commended in the Jim Hamilton Unpublished Manuscript Award, at the Federation of Australian Writers National Literary Awards, 2016.

She has a Doctor of Creative Arts degree from UTS, the creative component of which, The Sultan’s Daughter, was released by Obiter Publishing in 2020.