Fiona is a humourist, chicken enthusiast, performer and writer, who specialises in using a light tone to make a serious point. 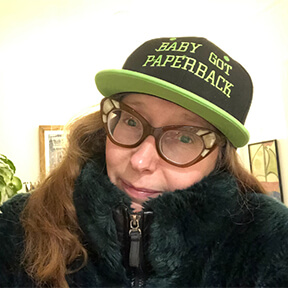 Fiona Scott-Norman is a humourist, chicken enthusiast, performer and writer, who specialises in using a light tone to make a serious point. Her most recent book is This Chicken Life: Stories of chickens and the Australians who love them, a collaboration with photographer Ilana Rose published by Pan Macmillan.

Her satiric personal column in The Big Issue magazine has been running since 2008, and her third book of interviews about not fitting in at school, Hard Knocks with Affirm Press, comes out late in 2021. Earlier iterations were Don’t Peak at High School, and Bully For Them. Her first Affirm title was a smarty pants two-sided look at giving up smoking, 50 Reasons to Quit Smoking/50 Reasons to Keep Smoking.

A one-time theatre and comedy critic for the Age, and arts writer for The Australian, FSN has also taught creative nonfiction writing at RMIT for ten years, and toured Australia and overseas with her two solo comedy shows (The Needle and the Damage Done: a top ten of the worst records every released, and Disco: The Vinyl Solution). She also works as a cabaret director, dramaturg and joke doctor, radio broadcaster (3RRR FM and ABC 774), essayist, MC and DJ.